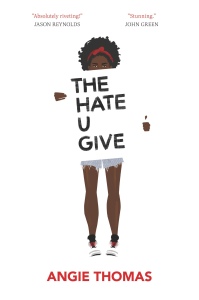 This. Book. Is. Long. Overdue!

“I’ve seen it happen over and over again: a black person gets killed just for being black, and all hell breaks loose. I’ve tweeted RIP hashtags, reblogged pictures on Tumblr, and signed every petition out there. I always said that if I saw it happen to somebody, I would have the loudest voice, making sure the world knew what went down. Now I am that person, and I’m too afraid to speak.”

The book centers around Starr, who witnesses her friend Kahlil get shot by a white police officer at a traffic stop. You know the story. You’ve most likely heard it before. Or maybe even seen it! There are endless youtube videos and dashcam videos of police shooting innocent black people. (I almost wrote “victims” instead of black people but let’s not try to hide the racism behind a raceless word.) This, whether we want to believe it or not, is a black issue.

“Daddy told me there’s a rage passed down to every black man from his ancestors, born the moment they couldn’t stop the slave masters from hurting their families. Daddy also said there’s nothing more dangerous than when that rage is activated.”

The book is divided up in 5 parts which I think symbolizes the five stages of grief. It is all so well rounded and touches on many different types of relationships. It’s one of the most layered books I’ve ever read that still manages to be clear and keep a natural flow and order of things. It delivers so many deep issues without being confusing or overcrowding the story.

It’s very well balanced between Starr’s complex relationships with her family, extended family, her friends from “the hood”, her friends from school and her white boyfriend. Even the places in the book are “characters” that sets a clear tone to where the scene is taking place. To me, some of the most interesting parts are the ones where her worlds collide.

The book is serious without being preachy, it’s funny without making light, it’s honest without being boring and sad without being depressing. In some way, it might even be a little hopeful. That change is on its way.

“Good-byes hurt the most when the other person’s already gone.”

iThere are no comments